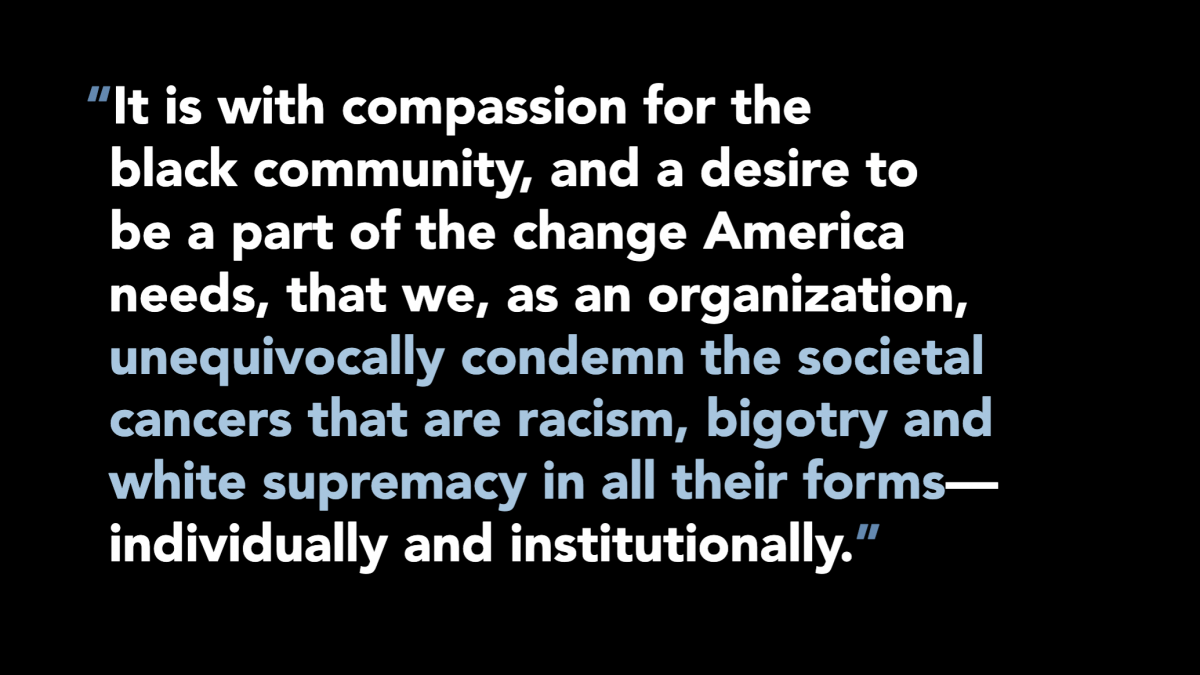 Statement Regarding Racial Injustice in America

We, mockers, are never short on words, are we? We often want to speak up, even when it’s not our turn, or the appropriate time to do so. Words so rarely escape us, much to the chagrin of our parents and teachers…

“May it please the Court.” “Objection!” “Find him guilty.” “Permission to approach, Your Honor?”

Maybe I am just speaking for myself.

Over the past week, however, I have been rendered speechless. Words have not only escaped me, but they’ve seemingly locked themselves in a closet and taken the key along with them. I’ve felt sadness and heartbreak, like many of you, but I have also felt unable to express myself.

I still don’t know the right thing to say, but I’ll start with what I do know: At Empire, we are driven by compassion. It’s a core value that informs all that we do because we believe the powers of compassion are limitless.

When we are driven by compassion, we are able to meet problems we don’t understand without judgment, and seek perspective with an open mind.

When we are driven by compassion, we don’t just listen to someone who’s hurting, we are able to hear their pain and communicate understanding.

When we are driven by compassion, we lead with love and empathy, rather than cynicism or skepticism.

That is why at Empire, we try to develop our young people into citizens who are not merely capable, but also compassionate. We believe that when compassion drives people, our laws and policies are more just and our conversations are more effective. And when we feel lost and angry, like so many of us do right now, we can use compassion as a lens to process the hurt and pain and confusion.

It is with compassion for the black community, and a desire to be a part of the change America needs, that we, as an organization, unequivocally condemn the societal cancers that are racism, bigotry and white supremacy in all their forms—individually and institutionally.

I will be the first to acknowledge that this statement may make many of our white Empire Family members uncomfortable. We don’t often have these difficult conversations about race unless we choose to have them on our own terms. You should know this message is not an attack on your character. You should also know that when we say that black lives matter, that does not negate the value of blue lives or white lives or brown lives.

As an analogy, I participated in the MS walk in high school to support one of my teachers. When I fundraised, I wasn’t saying ‘support MS and not cancer victims—they don’t matter’. (In fact, I lost my cousin to cancer in 3rd grade). Rather, at that moment in time, I was trying to raise awareness about MS, given the need, and help be a part of the solution. Later in high school, I would support a fundraising effort by the American Cancer Society. My desire to help MS victims didn’t preclude me from doing so. When you lead with compassion, there can be enough room in your heart for multiple causes.

With that said, we know there are thousands of good police officers who work to keep our communities safe, especially during this tumultuous time; this message is not a condemnation of them. We also know our brown brothers and sisters constantly face discrimination, and we will continue to support them. But in this moment, we are saying black lives matter because they do, and the need to make this declaration is real and urgent.

Empire Family, this letter acknowledges the reality that racism is weaved into all aspects of American society, especially our criminal justice system. While white people who live in 2020 America, like myself, may not be personally responsible for institutional racism, Empire believes that we all have a responsibility to end it. In other words, the way in which all of us respond to systemic racism, especially the white community, does bear weight on our character.

Contrary to what middle school taught me, racism didn’t just disappear after the Civil War, rear its ugly head again in the ’50s, and then get solved by Dr. Martin Luther King and a group of protesters in the ’60s. Systemic racism is as much a part of the fabric and fiber of our nation’s founding as the separation of powers. The only difference is that we celebrate the latter and often ignore the former. The truth is, there’s no objective version of American history that can be told—from start to finish—without a discussion of the impact of racism and white supremacy. If we’re being honest, in addition to the horrors of slavery, our history includes atrocities like the mass murder and removal of the Native Americans and the implementation of a sixty year ban on Chinese immigration (the Chinese Exclusion Act, 1882), even though it was mostly exploited Chinese workers who built the railroad system that connected us from “sea to shining sea.” Today, whether it’s mass incarceration or voter suppression, we see the impact of racism and white supremacy on our institutions in countless ways.

Renowned civil rights advocate, Bryan Stevenson, recently said the first step in the “reconciliation” process is to be honest about our telling of American history:

Following Professor Stevenson’s lead, I am encouraging our students to learn more about America’s past and how it has shaped where we are today. We are providing access to a resource library below, curated by Sydney Franklin, a black Empire alumna, to help guide you on your journey. I, myself, am continuing my own education on these important topics and would be happy to discuss what I am learning with anyone interested.

We also encourage our Empire Family to peacefully protest, where you feel called to do so. “This country was founded on protest — it is called the American Revolution,” highlighted President Obama this week, before adding “every step of (our) progress… every expansion of freedom, every expression of our deepest ideals have been won through efforts that made the status quo uncomfortable.”

Until now, I’ve wondered, what could I say or—more importantly—what should I say to address the pain experienced by our black brothers and sisters. As a white man, I’ll never know what it’s like to face the type of discrimination that black Americans do. Whether it’s in a courtroom or a classroom or a boardroom, I’ve never had to fear someone would treat me differently because of my skin color. More importantly, I’ve never had to fear someone would see me differently. Or, ever worse, not see me at all. I worried that any sentiment I tried to convey would seem hollow, lacking empathy, perspective or authenticity. I feared it wasn’t my turn to speak up—that it wasn’t appropriate for me, or the organization, to do so.

But this is what I’ve realized: Staying silent in the face of bigotry, racism, and discrimination can no longer be an option. Because sharing a message of love and support for the black community, and decrying systemic racism, is not only a moral imperative, but required by our mission. Our country cannot look ahead to progress without reckoning with our past.

So, we speak the names of George Floyd, Breonna Taylor, Ahmaud Arbery, Eric Garner, Trayvon Martin and Michael Brown. We will pray for their families, and the thousands of others whose stories weren’t captured on camera or in the news.

Because now, and always, #BlackLivesMatter.

With love, compassion and hope for the future,