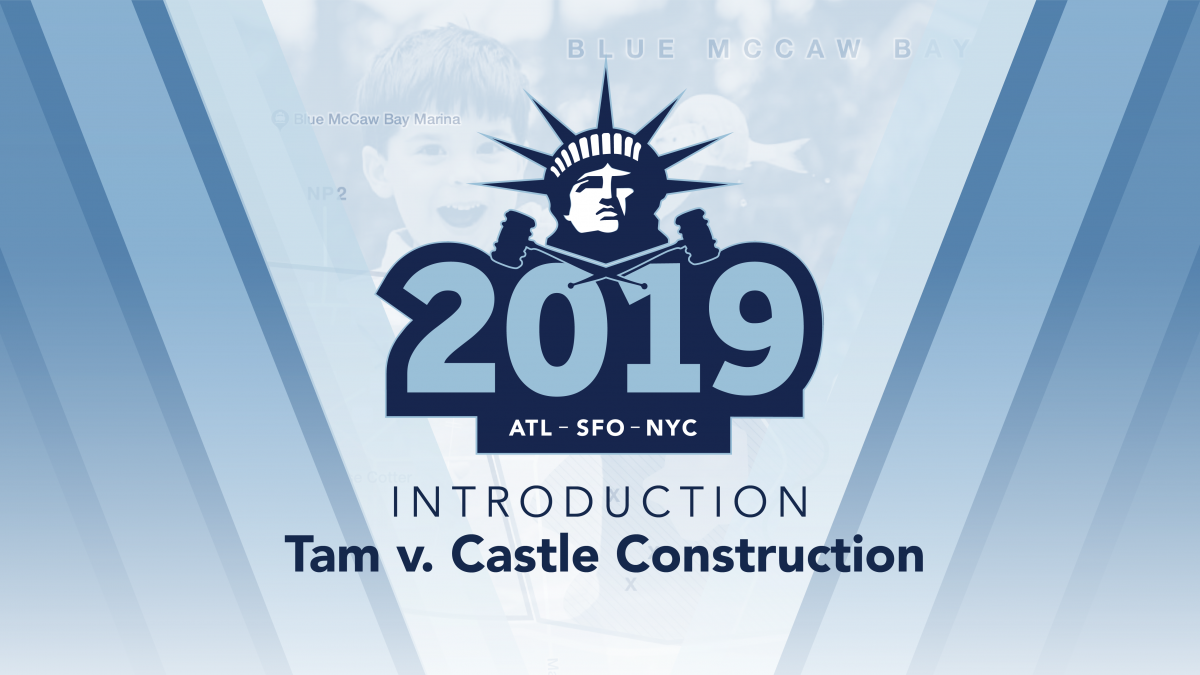 It is hard to believe that we are just 5 days away from publishing the 2019 Empire Mock Trial case: Tam v. Castle Construction. The Case Committee has worked tirelessly to put together a fact pattern that will challenge you both intellectually and emotionally. We are incredibly grateful to Collin Tierney, for developing this year’s case from the ground up, as well as the entire Case Committee, who helped Collin execute his vision.

Empire takes the subject matter of its cases quite seriously. As part of our mission to educate, connect and empower young people, we select case topics that shed light on particular social justice issues to which we want to expose our student participants. Mock trial, as an extracurricular activity, helps students build skills in public speaking, critical thinking and extemporaneous arguing, all of which will benefit them as they approach voting age and begin engaging with their laws on a local and national level. Their Empire case topic, however, empowers them to be more engaged and compassionate citizens–that is more important to us than learning how to raise an objection in court. We expose students to a problem, often ripped from the headlines, to help them broaden their perspectives and to foster within them a desire to care about their fellow citizens, regardless of their background.

The 2019 Empire case tackles a subject that has not been getting nearly enough attention in the news: environmental contamination and its impact on economically disadvantaged communities. This topic is vast and we could have tackled it in a number of different ways. To create a mock trial that is rich in debate, we selected a known dangerous chemical whose connection to a heart defect is considered attenuated, by some, and a near certainty, by others. Keep reading to get a sneak peak of this year’s fact pattern from the Case Committee Chair himself.

The Tam family thought they were benefiting from Castle’s low-income housing initiative. In 2015, they applied for a special low-income housing program at the brand new Sapphire by the Sea luxury apartment complex, out on the Blue McCaw Bay in Cotter, Empirion, and to their disbelief they were granted a spot. The building was state of the art, boasting spacious living areas, expensive amenities, and a rooftop swimming pool. They were given an apartment on the basement level, which wasn’t quite like the rooms in the advertisements, but it was still a dream come true.

What the Tam family didn’t know was that Castle Construction had declined to do testing of the construction site before they broke ground, even though an environmental site assessor had recommended they do so. And the Tam family certainly didn’t know that their beloved basement apartment unit was now filled with a chemical, trichloroethylene (TCE).

As we all continue to expand our knowledge of Empirion history, it helps to understand some background about the City of Cotter. Throughout the 1930s and 1940s, it was used by the US federal government as a naval base area. In the 1960s, 70s, and 80s, the area saw a boom of industrial growth, with a large shipping port that still exists to this day. There have been some serious industrial problems in the Blue McCaw Bay area, including an oil spill in the bay, and many reports of illegal toxic waste dumping on land along the shoreline.

The Sapphire by the Sea apartments had a hidden blemish. Toxic waste, the EPA would discover later, had also been illegally dumped and hidden on the grounds of the apartment complex. A lot of toxic waste–including a deposit of TCE–had since leached out of the soil surrounding the apartment and evaporated into the air of the apartment. And throughout 2015 and 2016, Evelyn Tam, pregnant with her second child, inhaled that TCE every day for the nine months of her pregnancy.

A year after moving in, the Tam family’s dream turned into a nightmare. Evelyn Tam gave birth to her second child, a baby boy she named Timothy, on July 16, 2016. Within minutes the doctors knew something was very wrong. He wasn’t breathing properly, and his heart showed complications.

It would be over a month before Evelyn’s son Timothy could come home. In that time span, he was emergency transported to Empirion State University Hospital, one of the best cardiac hospitals in the United States, located in Empirion’s capital, Pasquale. There he would undergo a battery of tests, treatments, and meticulous medical analysis by a senior specialist in pediatric cardiology.

The outcome of that analysis was devastating: Timothy’s heart had developed a problem at some point during development. He has an incurable condition called dilated cardiomyopathy, and only a 75% chance of surviving until the age of 5 without a heart transplant. Today, in June 2019, Timothy is still alive, but the family has not weathered this storm lightly; they live in constant fear that something could go wrong at any moment. It goes without saying that the expenses from caring for Timothy have been astronomical, and they don’t promise to get any better.

Timothy’s father Jeffrey and grandparent Sydney carry on a lawsuit against Castle Construction (Tim’s mother has since passed). That lawsuit alleges negligent failure by Castle Construction to maintain a safe premises and negligent failure to warn tenants of an environmental hazard. Witnesses include family members, environmental engineers, financial analysts, industrial workers, as well as the medical scientists–a pediatric cardiologist and a toxicologist.

That’s where you come in.

Why We’ve Chosen This Topic

Oftentimes, social justice is not simple, glamorous, or accessible. This year, we wanted to reveal a frustrating but important truth about tragedy–that it is often underreported and difficult to make right. For our American competitors, you may be familiar with the ongoing scandals in this country over unsafe drinking water, unsafe housing, and the difficulties facing poor and minority communities who most need help.

We expect that this will be a challenging case for another reason as well. The legal issues in Tam v. Castle Construction are–perhaps surprisingly–very simple, but the facts are not. In line with feedback from past cases, we tried something new this year: simplifying the legal cause of action, but deepening the facts. It is our hope that the legal theory will feel streamlined compared to prior Empire seasons. But as for the facts… well, you will have your work cut out for you.

For several seasons now, we at Empire have tried to hew as closely as we feel practicable to realism (realism above all with respect to the legal process and the scientific evidence). Let’s just say that in this year’s case we turned that dial up a notch or two. All of the science in the case packet is real. Every single scientific study mentioned by the medical or toxicological experts is real. Every symptom, every method, and every conclusion has been painstakingly researched with feedback from real, leading experts in the actual fields at issue in this case. If we found something relevant to a real expert’s opinion on these issues, we erred on the side of including it in the fact pattern.

We do want to assure you that we’ve done our best to take some of the other stressors off your plate with this year’s case. There are eight witnesses in the case file, with four side-constrained witness options per side, but two witnesses are locked in for the Plaintiff in every trial, and one witness is locked in for the Defense. There are fewer witness call-driven strategies to worry about this year.

Additionally, you will find that many of the evidentiary issues you may be used to litigating in the middle of trial via objections have already been dealt with by a pretrial judge. A large number of evidentiary issues related to 702 expert certification, 702 scope of expert testimony, ultimate issues, attorney-client privilege, third-party liability, hearsay, and even subsequent remedial measures have already been pre-litigated by the Parties before you will ever step foot in your courtroom. This is, again, more in line with how real big torts cases (civil actions) are tried in the United States, and it should free up more of your time to focus on presentation and crafting the best story.

Back to the science.

This year, science is such a central focus of our case that the Pretrial Oral Argument (POA) is going to be all about scientific methodology, in the form of a contested Daubert hearing. In honor of that teammate of yours who always just has to trip opposing counsel up with a dozen expert evidentiary objections every trial, we are devoting the entire POA section of this year’s case to Rule 702(c), and Daubert v. Merrell Down Pharmaceuticals, Inc., 509 U.S. 579 (1993), the seminal US Supreme Court case that defined the meaning of “reliable principles and methods.” You’re going to litigate whether the experts in this case may rely on a controversial (and fully unedited, real) scientific study. The results of this POA will noticeably affect the strength of the Plaintiff’s medical causation theory at trial.

During the creation of this case, our Case Committee discussed the pros and cons of writing a more detailed fact pattern. We debated inventing science to make it simpler. But in the end we decided to take this route because we believe it’s the right thing to do from an educational perspective, and because we know you, our Empire competitors, are here because you can handle it.

They say that storytelling is the most important key to good trial advocacy. We look forward to seeing what you come up with. Good luck, and enjoy Tam v. Castle Construction!